The Canon EOS R3 isn’t all that new. The manufacturer had repeatedly published preliminary characteristics of the camera even before the official announcement, which took place in September. But it’s one thing to see dry numbers; it’s another to get to know the camera in person.

I had such an opportunity at the New York presentation. I’ll tell you about the main thing in this preview and share my first shooting experience with the Canon EOS R3. Naturally, there will be test shots and videos.

It is a professional reportage mirrorless camera for Canon, the first of its kind. And to win the hearts of conservative photographers, the engineers had to work out the product to the smallest detail. One of the main features was the uncompromising characteristics. No, it’s not about record numbers. All the properties declared in the specifications should be working without any footnotes with asterisks. Looking ahead, I will note that they succeeded in almost everything.

The basis of the camera is a 24.1-megapixel full-frame image sensor of its design and production, and Canon puts a special emphasis on this. The sensor incorporates all the most “fashionable” modern technologies: multilayer architecture and back-illuminated construction.

The base ISO range extends from 100 to 102,400, expandable by one stop on each side. Here the sensor plays into the hands of the minimum resolution in the class compared to competitors.

Multilayer construction is required for maximum read speed. The fact is that the maximum rate of fire of 30 frames/s is available only when using an electronic shutter. I am talking about shooting with autofocus and automatic exposure in RAW and JPEG. 30fps is available with all lenses in the EOS R System. So there are fewer limits than the competition.

There is also a mechanical shutter in the camera, and it works at speeds up to 12 frames/s.

The Rolling Shutter effect has been reportedly reduced by a quarter compared to the Canon EOS-1D X Mark III. And in order not to go far, I will give a few pictures and videos with fast-moving rectilinear objects in the frame, shooting with artificial light. The problem of streaking in the photo did not appear in any frame.

The electronic shutter has set a new ceiling for many camera characteristics. Filming can be completely silent. Slightly less obvious, but the camera can also flash silently: up to 15 fps with E-TTL flash. Sync speed 1/180 sec.

Electronic shutter speed ranges from 30 s to 1/64000 s. Why use such a short shutter speed is a question, but now there is a technical possibility. Recall that professional DSLRs could work out only 1/8000 s, which was already excellent.

Well, as soon as we have a mirrorless camera of the EOS R family, there is also a place for a built-in stabilizer in it. Effectiveness is claimed up to 8 exposure stops. You can see how the stabilizer works when shooting handheld in my videos.

The speed of work has become the same bait that professionals, who are now shooting with the top-end DSLRs of the brand, should bite. But pleasing them is not easy. When you shoot a professional reportage, the requirements for sighting are too high; everyone is used to an optical viewfinder, but here – an electronic one.

However, a very cool electronic one: the resolution is 5.76 million points, and the refresh rate is 120 Hz. Subjectively, it is perceived perfectly: the display lag is not fixed by the eye, the picture does not flash or flicker – it is as close to the optical viewfinder as possible.

Additionally, the function of imitating JVI is implemented here. In this mode, you see not a “future frame” in the viewfinder but a brighter and more vivid one – a sort of HDR.

But the main secret of the viewfinder has to do with the autofocus system. It is not for nothing that we have not said a word about that yet. Of course, the top-end mirrorless of the brand implements technologies similar to competitors: face, eye, animal, and vehicle recognition. The algorithms are created using machine learning.

The basis of the autofocus system is the second generation of the proprietary Dual Pixel CMOS AF II technology, which allows realizing phase autofocus on the image sensor with 100% frame coverage. And all this works for a solid five. And yet, the most exciting thing is the choice of the focusing object with your gaze.

Canon EOS R3 can track the movement of the photographer’s pupil. It is done using a system of IR LEDs and a unique sensor in the viewfinder. It’s not so much about choosing a focus area as about choosing a subject. If there are several similar objects in the frame, for example, the camera can apply face and eye recognition technology to exactly who the photographer is looking at. A glance at another person, and now his eye is in focus.

The “sight” in the viewfinder moves with lightning speed following the eye. Frankly, this function looked much more modest and less impressive on paper. But in fact, the combination of recognition algorithms and the choice of an object with the help of a glance take the shooting just to another level.

In my hands, this function worked immediately and without question, but in general, for correct operation, calibration is required for a specific eye and even shooting conditions.

The mirrorless Canon EOS R3 has become much more compact and lighter than the mirrorless flagships. Weight with memory card and battery 1015 grams. It is even less than that of the main mirrorless competitor. The EOS R3 feels surprisingly light in the hands. Some people like it, some don’t. But this is a fact.

At the same time, the camera has not lost its protection against dust and moisture, as well as compatibility with the previous LP-E19 batteries. In the EOS R3, the battery can even be charged while powered from an external power source from the PD if the battery capacity is sufficient for this.

We are already accustomed to the fact that today a mirrorless camera is always a hybrid of photo and video capabilities. Canon EOS R3 is no exception. Due to the relatively modest resolution of the sensor, there was no room for 8K video shooting, but there is 6K recording up to 60 frames/s in RAW to a memory card (stock up on fast CFexpress 1400 MB/s). There is also a “light” RAW for video: 1800 MB/s instead of 2600 MB/s.

In 4K, shooting is possible at an increased frame rate of up to 100/120 frames/s. C-Log3, HDR PQ, 4:2:2 downsampling are available. Naturally, autofocus and stabilization work great.

The Canon EOS R3 is the brand’s first camera to feature a new multi-function shoe connector. It is designed to accommodate additional accessories currently being released, such as microphones. And an interesting point: to use old flash units, a dedicated AD-E1 adapter is now desirable. Only with it will the shoe’s moisture protection be ensured when installing an old flash.

The three largest camera makers have moved with fast and intelligent mirrorless cameras. The next move must be made by photographers, adopting the new mirrorless rules of the game. On the one hand, it looks like a compulsion to move. On the other hand, it is like a completed technical revolution.

Live picture in an electronic viewfinder, previously inaccessible shooting speeds, built-in stabilizer, high working ISO, autofocus with recognition of everything that only moves. And now also the choice of the main object in the frame with a glance. Could all this have been dreamed of twenty years ago?

If you are interested to buy this professional reportage mirrorless camera by Canon, you can buy it on Amazon for $6555. 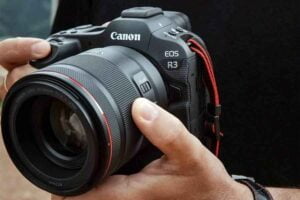